2. The king pin placed in the steering knuckle mounting hole.

4. An oil storage hole is provided on one end of the main pin. 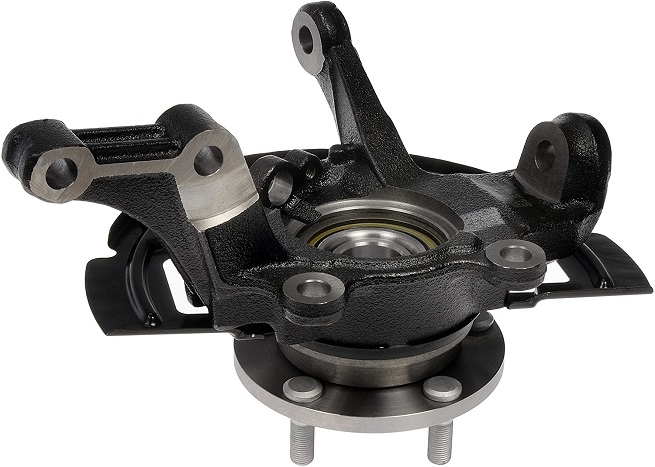 Compared with the existing steering knuckle assembly, the utility model processes spiral grooves on the inner circumferential surface of the sleeve, which has the advantage of being simpler than the process of processing oil storage points; in addition, there is no need to open an opening on the circumferential surface of the king pin, which effectively ensures the strength of the king pin and eliminates the hidden safety hazards of the passenger right steering knuckle assembly.

When assembling the steering worm and nut assembly, first put the steering nut on the steering worm, place the nut on one end of the worm raceway and align the nut raceway hole with the raceway, and then put the steel ball into the nut raceway hole, While rotating the worm, insert the steel ball (two races can be carried out at the same time, apply a small amount of grease to both ends of the pipe and insert it into the pipe hole of the nut; at the same time, tap the pipe lightly with a wooden hammer to make it fall to the bottom; then use The pipe clamp presses the pipe on the nut and fastens it with screws. After the steel ball is installed, turn the worm by hand to ensure that the nut rotates flexibly within the full length of the worm raceway and does not get stuck. When the worm and nut assembly are in a vertical position At the same time, the nut should be able to fall freely and uniformly from the upper end of the worm. Finally, press the outer ring of the centripetal thrust ball bearing into the bottom cover and the housing, and at the same time, press the bearing inner ring assembly to both ends of the steering worm.